DEVOTIONAL #6
A SON HAS A SERVANT'S HEART 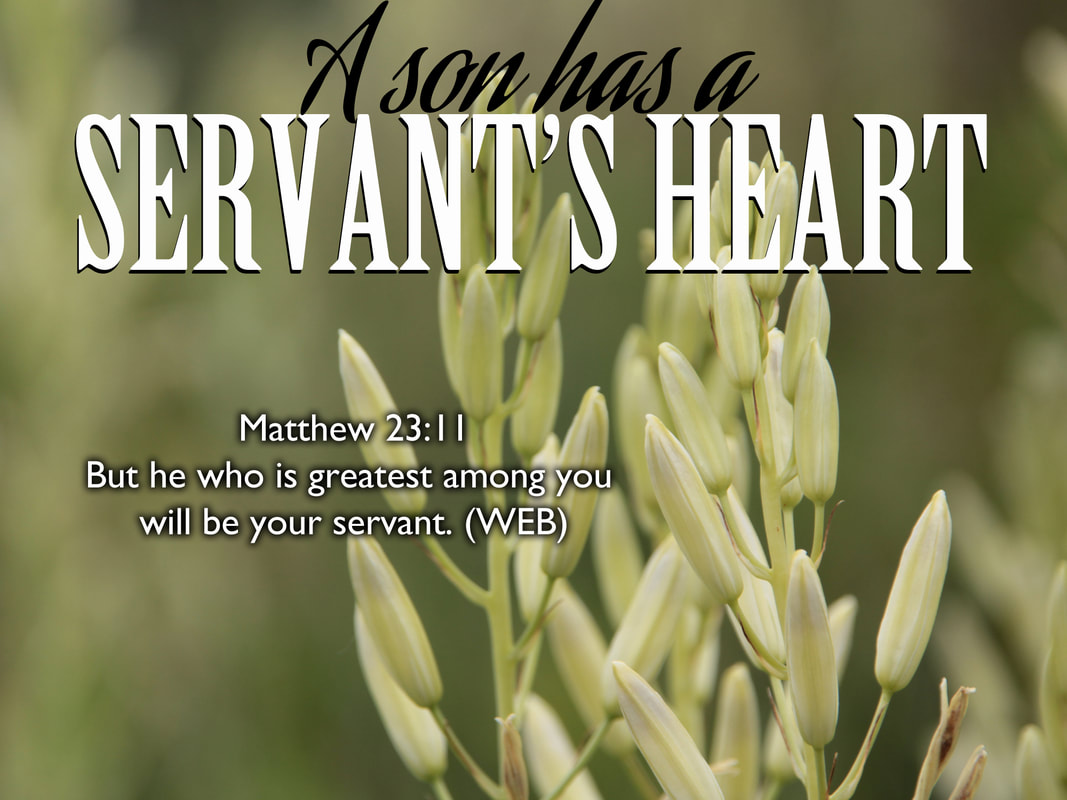 Jesus is the expressed image of the invisible God (Colossians 1:15) and the exact representation of the Father's being (Hebrews 1:3). Everything that the Son did was the perfect expression of the Father working through Him. As a matter of fact, the Father and Son were so unified, that in John 14:9, Jesus told His disciples that when they were looking at Him, they were also looking at His Father too.

Yet the One who did not think that equality with God was something to be be grasped after, humbled Himself and took on the form of a lowly servant and became obedient even to death on a cross. (Philippians 2:6-8) Even as He was preparing His heart to endure unspeakable suffering on the eve of that first Good Friday, He wasn’t thinking of Himself. Even then, He was thinking of His friends when He washed their dirty feet (John 13:1-5) in order to model the Kingdom value of servanthood to them (John 13:12-17).

Because He knew that His Father loved Him from before the creation of the world (John 17:24) and that He had placed all things into His hands (John 13:3), Jesus was happy to take the lowest position possible and serve His friends at that last fateful meal together. To think that the very Word of God (John 1:1) and the One who in Himself holds every atom in the universe together (Colossians 1:16-17) came not to be served but to serve and give His life a ransom for many, (Mark 10:45) absolutely blows me away.

Yet even in His foot washing act of service, He was only doing what He saw His Father doing. In this week’s Scripture focus, Jesus tells His disciples that the greatest will be the servant. In John 14:28, Jesus also said these words… "My Father is greater than I”. So it only stands to reason that if the greatest in the Kingdom will be the servant of all, then our Heavenly Dad must have the greatest servant heart in the universe!

I believe that sons and daughters who truly walk in a true revelation of love, carry within their being the very same heart as Jesus. When a son knows that he is loved by the most humble, beautiful heart in the universe, he will no longer need to grasp power for power’s sake. Instead, he will make love his greatest aim (1 Corinthians 14:1).

We read Paul’s description of the nature of love in 1 Corinthians 13:4-7 when he writes… 4 Love is patient and kind. Love is not jealous or boastful or proud 5 or rude. It does not demand its own way. It is not irritable, and it keeps no record of being wronged. 6 It does not rejoice about injustice but rejoices whenever the truth wins out. 7 Love never gives up, never loses faith, is always hopeful, and endures through every circumstance. (NLT)

There is nothing self-centered in the heart of love. As God’s beloved children (1 John 3:1), we are called to live in the very substance of love ourselves (1 John 4:16) and imitate our Father because we are His dearly loved kids. (Ephesians 5:1-2)

While I do believe that it is a biblical principle to honor and submit to both natural and spiritual authorities here on earth, I also believe that the call of the Christian life is to submit one to another as well (Ephesians 5:21). Oftentimes, in church life, if we are not seeing through the lens of love, we can tend to embrace more of a corporate CEO mentality of leadership rather than the one that our Elder Brother taught us to live in Matthew 23…

I truly believe that the more we walk in our Father’s love, the more we will be drawn to those who reflect His true nature. I believe that a sure sign of true spiritual authority is the one that comes from servant heart, not one who is prone to abuse the authority entrusted to them. More now than ever, I am convinced that control and manipulation do not have any place in our Father's family.

A friend of mine once told me this... "A shepherd doesn't have to tell the sheep to follow him.” The reason the sheep gladly follow the shepherd is because they know that he will gladly lay his life down for them. If the sheep have to be coerced, shamed or abused in the process, I would guess that the issue is more with the shepherd than the sheep! The story of the gospel is a story of our Great Shepherd and His willingness to lay down His life down for His sheep (John 10:11) and His friends (John 15:13).

As we reflect on the amazing servant heart of the Godhead, may we all embrace the beautiful humility that love and gentleness brings. In describing Jesus in Isaiah 42:3, Isaiah writes... 'a bruised reed He will not break, and a smoldering wick, He will not put out'. May the infinite goodness of the Trinity bring healing to every part of our heart that has been broken by those who have abused the authority that they were entrusted with in our lives.

I pray that the love of God will restore us all to the place of being able to trust again and may we gain heaven's perspective on what true greatness is... and that is simply reflecting the same servant heart that is the hallmark of our eternal family (Ephesians 3:14-15).

May we all know that our Heavenly Father is not like the broken images of authority we have experienced here on earth. God is love and love does not seek its own. May we all be beautifully humbled by our Papa's everlasting love as we realize that He is the greatest servant of all! And just like Jesus, our Heavenly Father stoops down to wash our feet too. Growing in our sonship is learning to be just like Him!

John 13:1, 3-5
Now before the feast of the Passover, Jesus, knowing that his time had come that he would depart from this world to the Father, having loved his own who were in the world, he loved them to the end. 3 Jesus, knowing that the Father had given all things into his hands, and that he came from God, and was going to God, 4 arose from supper, and laid aside his outer garments. He took a towel, and wrapped a towel around his waist. 5 Then he poured water into the basin, and began to wash the disciples’ feet, and to wipe them with the towel that was wrapped around him.  (WEB)