DEVOTIONAL #25
A SON FREELY GIVES WHAT HE RECEIVES 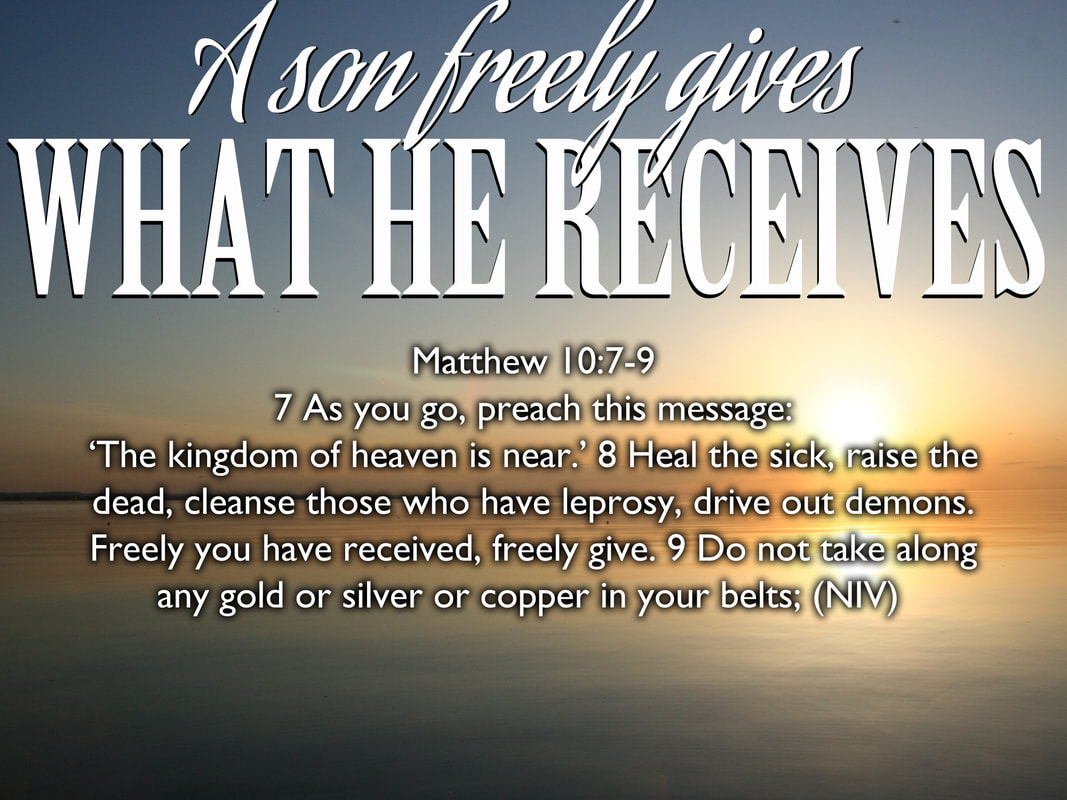 Jesus gives this charge to His disciples just before He sends them out into the world to proclaim the good news of the Kingdom. He commands them to do some pretty big things as they go along the way... Heal the sick, raise the dead, cleanse the lepers and drive out demons. No biggie... right?

Well, not exactly. In their own strength, every one of these things that Jesus commanded them to do would be impossible. But the key to them accomplishing these 'mountain moving' kind of tasks was when Jesus said... Freely you have received, freely give.

A son's life is learning how to give to others what he first received. Jesus modeled this in the way that He lived in complete dependence upon His Dad. In John 5:19-20, He told His disciples that He could do nothing apart from His Father. In John 14:10 Jesus said that it was the Father living in Him that was doing the work. In John 15:9, Jesus told His disciples that He loved them exactly in the same way as He Himself was loved by His Father.

I believe that this is one of the greatest principles in the Kingdom that we can learn... We can only give away what we have first received. Peter and John operated in this principle when they healed the cripple in Acts 3 when they told him... "Silver and gold have we none, but what we have, we give to you."

In 1 John 4:19, the Apostle John reminds us that the reason we are able to love in the first place is because He FIRST loved us. Papa initiates... we receive. He loves and we respond to His love. I believe this is what Paul is talking about in Romans 8:14 when he said... For as many as are led by the Spirit of God, these are children of God. (WEB) The Spirit of God initiates, and then we simply follow.

A son who knows how to receive, draws from the riches of his Father's inheritance in Christ. The more that he receives, the more that his cup will overflow to those around him (Psalm 23:5). It is in this abundance that rivers of living water will gush out of our belly (John 7:38). Though we will never be the initiators of this river, by positioning our hearts to receive, we can certainly be recipients who have enough left over to water all who are thirsty around us!

I believe the Christian life is that simple. If I don't have it, I can't give it. I'm not saying that I haven't tried to give when I had nothing to give, because I have. ...But it has never been a pleasant experience. All I ended up doing was exhausting myself and others (which is not consistent with the easy yoke that my Big Brother promised me in Matthew 11:28-30).

Religion on the other hand, is the practice of trying to initiate to God something of our own making in order to please Him and justify ourselves. It is not a response to God, but rather our own initiation of something that we perceive to be spiritual. In the name of 'working for the Lord' or 'being all things to all men', if we are not careful, the result may just be a piling up of a bunch of wood, hay and stubble.

In Romans 12:1-2, the Apostle Paul tells us to present our bodies as living sacrifices to God. Oftentimes we will use this Scripture passage to justify all the good works that we initiate... but we will miss the point entirely if we skim over the first few words of verse 1 where Paul says... "In view of God's tender mercies". Everything after these first few words should be done in a response to our loving God and Father. When He pours out His tender mercies, there is no other appropriate response other than worshiping Him. He initiates - we receive and then we respond.

An orphan on the other hand, does not feel that he has access to such a rich free flowing inheritance so he has to be the driver behind ever effort. After all, the reason why a person struggles with an orphan mindset in the first place is simply because they are not yet convinced that God is really their Dad. If they truly haven't embraced the sonship that Jesus died to bring them into, then it is understandable that they would feel like they have to do things all on their own. But that it not the gospel story.

Even in the beginning of humanity, it was the Father who gave everything to man and woman as a gift. Lots of animals to befriend, a weed-free garden, and of course daily strolls with the Almighty in the cool of the day. It was only when they were driven from the Garden, that God told Adam that part of the curse would be that he would have to work by the sweat of his brow. This was not a blessing, but part of the curse.


The whole point of Jesus coming to the world two thousand years ago was to restore us to the place of being sons and daughters to the Father (Galatians 4:6-7). Because of what our Big Brother has done, we now can live in the fullness of the abundant live that Jesus secured on our behalf (John 10:10).  And part of that abundance involves us freely giving away to others what we freely received ourselves.

My prayer today is that we would all be so overwhelmed with God's love that our life would be a continual response to His kindness.  And may we be so caught up in a dance where He leads and we simply follow, that it would never occur to us to enter back into a place of self effort ever again. For it is continuing to live in a posture of receiving that we will truly be filled with the full measure of the fullness of God (Ephesians 3:19).

Who knows, maybe in our overflow, we will see the same wonders that the disciples experienced when they saw the sick healed, the oppressed set free and the dead raised back to life?