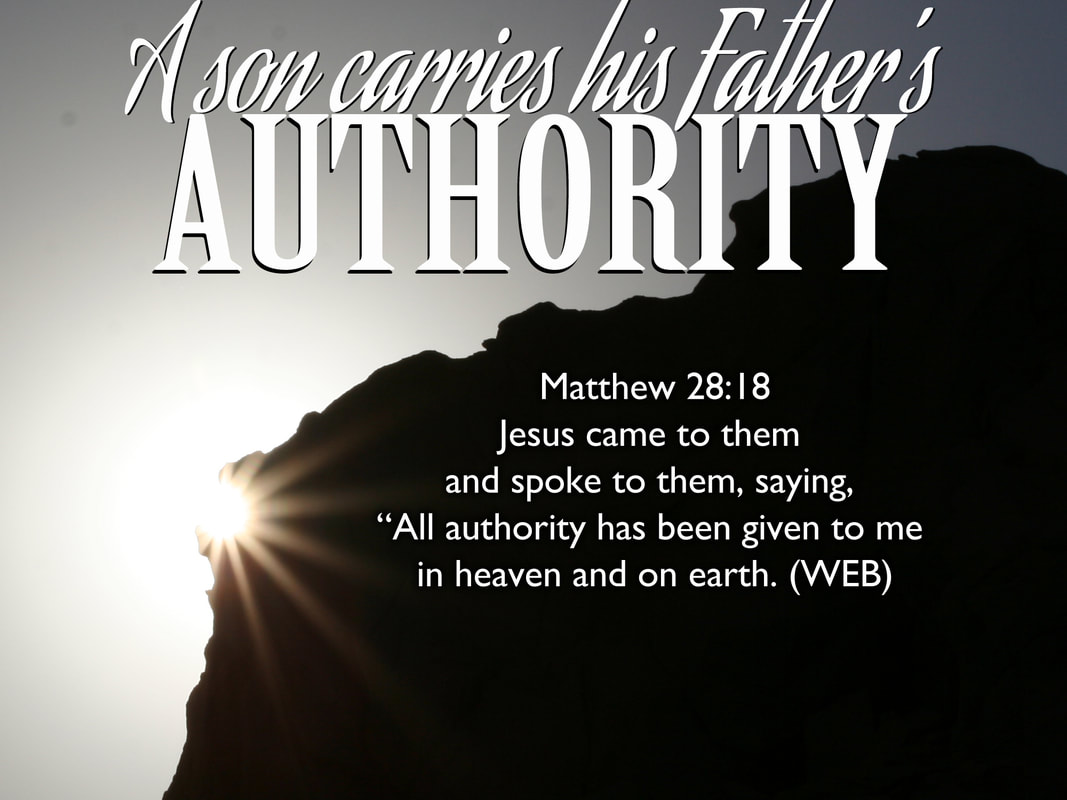 The Great Commission is one of the most memorable charges that Jesus gave to His friends when He told them to go into all of the world and make disciples of all nations. Let’s read it…

Matthew 28:18-20
18 And Jesus came and said to them, "All authority in heaven and on earth has been given to me. 19 Go therefore and make disciples of all nations, baptizing them in the name of the Father and of the Son and of the Holy Spirit, 20 teaching them to observe all that I have commanded you. And behold, I am with you always, to the end of the age." (ESV)

I find it interesting that we see a transference of authority in this passage of Scripture from Jesus to His disciples. In order for Jesus to be able to give His disciples the authority to go, He first had to be given the authority Himself from His Father. In verse 18, we read that indeed that was the case when Jesus said… "All authority in heaven and on earth has been given to me". (ESV)

If we want to better understand how authority works, it is helpful to have a glimpse into the relationship between the Father and the Son revealed in John 17. In verse 9, Jesus makes a powerful declaration to His Father when He says… All I have is yours, and all you have is mine. (NIV)

Jesus didn't have to grasp or strive to earn His position in the Kingdom. He was the only begotten Son of the Father and as such, He was heir of all things. It was in their unbreakable union that everything that belonged to the Father belonged to Jesus and vice versa.

Jesus knew who He belonged to. He knew that He was His Father's Son and this revelation gave Him the courage to walk in the humility of a servant heart (John 13:1-5), yet with an authority that caused His Father to exalt Him to the highest place above every name that is to be named.

In Philippians 2:1-11 we read how Jesus did not consider equality with His Father as something that He had to grasp for. Instead, He was happy to humble Himself, take on the form of a servant and became obedient even to death on the cross.

The implications for us in this divine exchange are staggering! By virtue of our union with Jesus, we are now caught up in the same glorious relationship that the Son enjoys with His Father (John 17:23). Simply put, everything that we have comes from Jesus because He is the vine and we are the branches (John 15:5) and everything that Jesus has, comes from His Father!

So the authority that Jesus has imparted to us will not only empower us to do the greater works that Jesus spoke of, but it will also give us the grace and humility to take on the form of a servant and wash each other’s feet. However, if we don’t understand that the true authority is rooted in a love relationship with our servant-hearted Father and His servant-hearted Son, then there will be great potential for spiritual abuse.

Those who struggle with an orphan mindset, lack a healthy understanding of the authority that is imparted to loved sons. Because they aren't secure in their position in the family, they may still feel the need to establish an identity and an authority that is based on their own self-effort. If someone doesn’t carry a revelation of who their Father really is, they will believe that they have to work and compete for everything they get. And they will hang on to every ounce of authority that they have earned!

I believe that one of the secrets to walking in the inheritance that the Father wants to give us is to simply have the faith to receive it as a gift (James 1:17). Jesus told His disciples in Matthew 10:8 to… 'Freely as you have received, freely give'. Then He sent them out with the authority to heal the sick, cast out devils and raise the dead.

When we see the Kingdom through the lens of family love, we will begin to better understand how the family of God works. It’s not run by generals and CEOs barking out orders to the minions, but rather by fathers and mothers in the faith who are thrilled to see their kids surpass them in every way.

When it finally dawns on us that we are all joint-heirs with Jesus and fellow citizens of the household of God right now, the idea of having to fight for position (with each other) seems ludicrous. When we realize that we all carry within our own spiritual DNA our Heavenly Father's seed (1 John 3:9), it will be understood that with His DNA comes the authority to represent His heart here on earth. That is why Jesus told us to be merciful just as our Father is merciful (Luke 6:36).

Even though Jesus has given us His authority, that authority is never to be our focus. In Luke 10, we read that the seventy-two that Jesus sent out came back rejoicing because even the demons were subject to them. I find Jesus’ response quite interesting in verse 19-20… 19 I have given you authority to trample on snakes and scorpions and to overcome all the power of the enemy; nothing will harm you. 20 However, do not rejoice that the spirits submit to you, but rejoice that your names are written in heaven.” (NIV)

Even though we carry the mantle of our Father’s authority as we walk this earth, that is not the big deal! The big deal should be now and forevermore that we belong to God and He has written our names in heaven! If our reason to rejoice is focused more on power rather than in relationship, then our pursuit to acquire a counterfeit authority may soon follow.

Though we are a nation of kings and priests to God (Revelation 5:10), we are called to manifest the gentle and humble heart of our Big Brother (Matthew 11:28-30) and His servant’s heart. Though we have access to all of the resources of heaven to heal the sick, cast out devils and raise the dead, our greatest calling is to live our lives in love (1 John 4:16).

My prayer today is that we would all have a supernatural insight into our God ordained place in the Kingdom. We are not servants fighting to get to the top of the food chain, but beloved sons and daughters who have been entrusted with the highest relationship there is outside of the Trinity itself.

I pray that the revelation of the divine authority that comes from our Father, would bring us into a deeper sense of rest in our heavenly identity as His beloved kids (1 John 3:1). After all, our Dad just happens to be the Creator of the universe and Almighty God!