DEVOTIONAL #42
A SON SEES WITH THE EYES OF FAITH 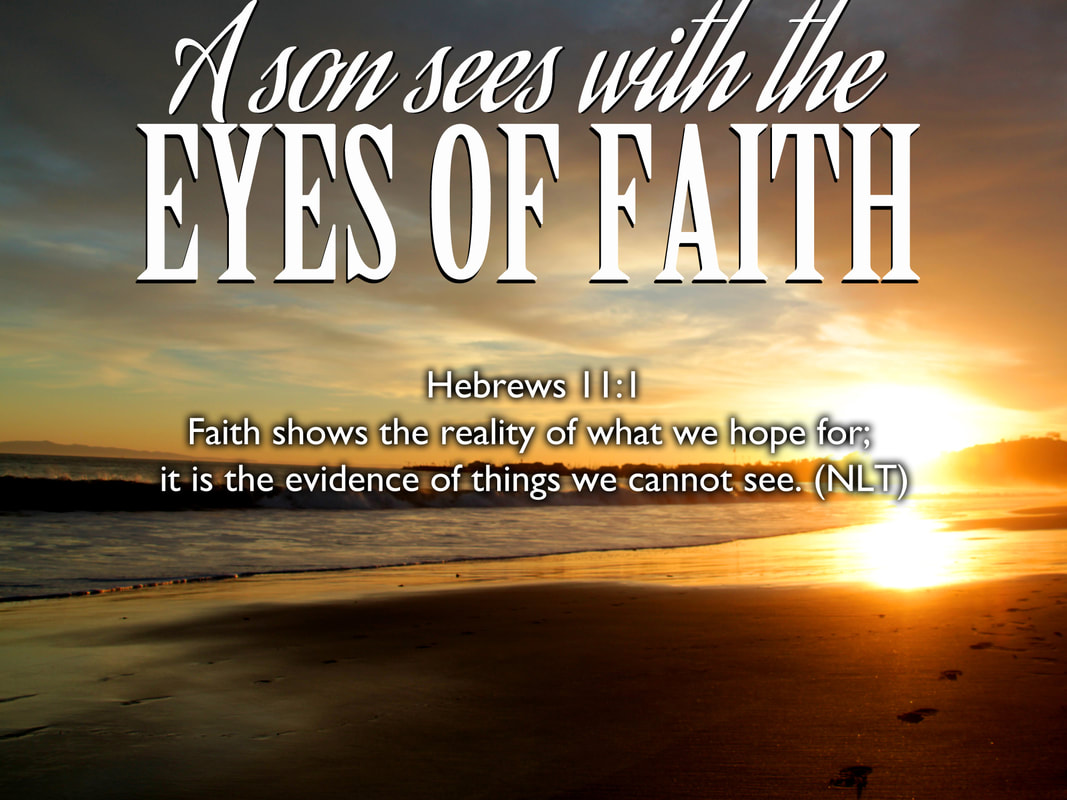 We are called to be sons of the kingdom of God. Our destiny is to live as children of light (Ephesians 5:8). Though we live in the world, we are not of this world. Our spiritual DNA comes from above.  In the Lord's prayer, Jesus taught us to ask our Heavenly Father to send His kingdom to this earth so that His will would be done here exactly as it is in heaven (Matthew 6:9-13).

Though each one of us spends our days seeing the effects of the fallen world in which we live in, there is another spiritual reality at work that calls us to set our affections on things above and not on things of this earth (Colossians 3:2). Though the pain and suffering that we see with our natural eyes is very real, there is another dimension of vision that we are called to see with... The eyes of faith.

In this week's Scripture verse, we read how faith is the assurance of the things that we hope for and the proof of things not seen. Faith is not something we see with our natural eyes and it is not something that can be understood from an earthly perspective. Faith requires great trust and belief in order for it to flourish in our lives. In Hebrews 11:6, the author goes on to say... Without faith it is impossible to be well pleasing to him, for he who comes to God must believe that he exists, and that he is a rewarder of those who seek him. (WEB)

If you continue to read Hebrews 11, you will read of many biblical heroes who lived by faith in God, even though their present circumstances seemed to be in direct opposition to the plans and purposes that God had for them. We read how a man named Noah built an ark in a dry land for over 100 years. We read how Abraham left his safe and secure surroundings to go to a country where God told him to go, and then he later had a child with his wife Sarah in their old age.

Time and space prevent me from talking about Moses, Isaac, Jacob, David and all of the other heroes of this chapter that lived a life seeing into the unseen and not living by their natural sight. Some of them accomplished the impossible and wrought great victories while others suffered terribly, knowing that their reward was not of this world.

I believe that we have a unique opportunity to touch our Heavenly Father's heart this side of heaven when we choose to live by faith. After all, when we get to heaven, we will have no more opportunities to exercise our faith in the way we can now.

My prayer today is that each and every one of us would cry out to God... “I do believe; help me overcome my unbelief!” (Mark 9:24 NIV) I pray that our God and Father would open the eyes of our hearts so that we could really see the reality of who we are and who God is.

May we all have a new boldness to simply believe God to be true and come into agreement with the Apostle Paul's prayer to the church at Ephesus when he prayed that the eyes of their hearts would be opened so that they would know the hope of their calling... whether their earthly circumstances lined up with the heavenly reality or not!

Ephesians 1:15-23
15 For this cause I also, having heard of the faith in the Lord Jesus which is among you, and the love which you have toward all the saints, 16 don’t cease to give thanks for you, making mention of you in my prayers, 17 that the God of our Lord Jesus Christ, the Father of glory, may give to you a spirit of wisdom and revelation in the knowledge of him; 18 having the eyes of your hearts enlightened, that you may know what is the hope of his calling, and what are the riches of the glory of his inheritance in the saints, 19 and what is the exceeding greatness of his power toward us who believe, according to that working of the strength of his might 20 which he worked in Christ, when he raised him from the dead, and made him to sit at his right hand in the heavenly places, 21 far above all rule, and authority, and power, and dominion, and every name that is named, not only in this age, but also in that which is to come. 22 He put all things in subjection under his feet, and gave him to be head over all things for the assembly, 23 which is his body, the fullness of him who fills all in all. (WEB)