DEVOTIONAL #27
A SON LIVES TO PLEASE HIS FATHER 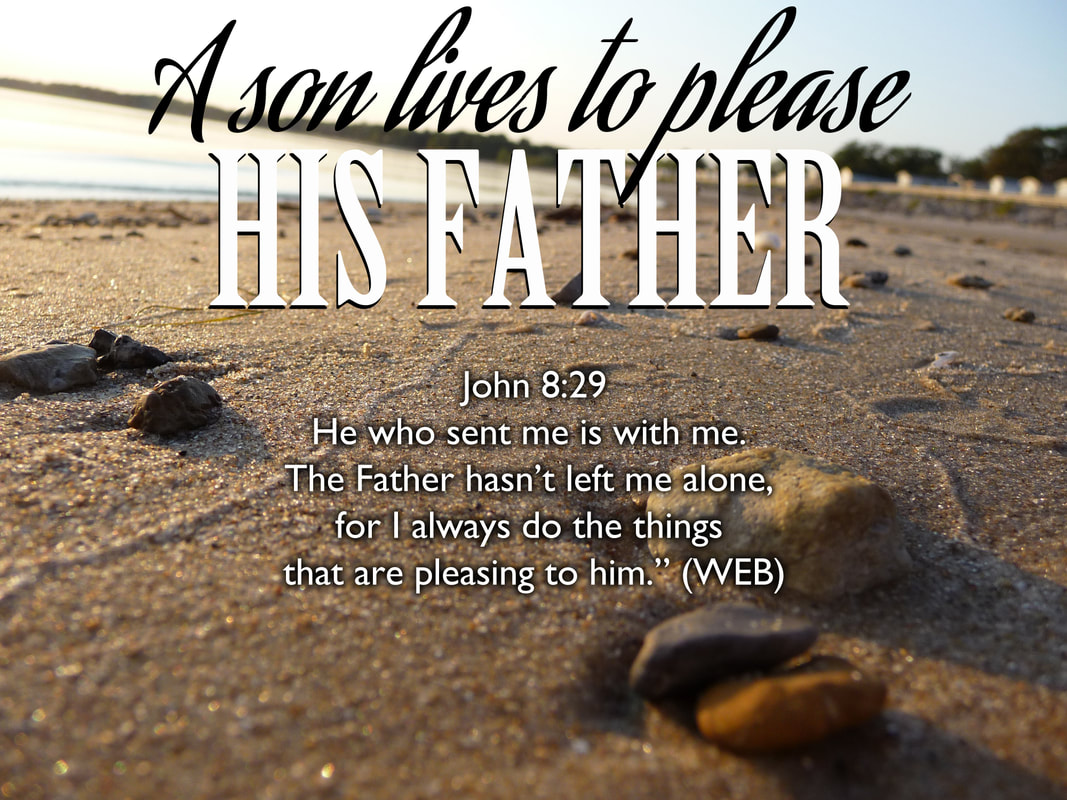 Everything that Jesus did was an expression of His love for His Dad. Every act of kindness that He displayed to an ungrateful people was motivated by His desire to always please His Father. In turn, His loving Father showed Him all that He was doing (John 5:19-20).

Together, both Father & Son, sealed by the love forged between them by their own Spirit, went around doing good and healing all who were oppressed of the devil (Acts 10:38). Their union was a constant delight as they blessed every baby, healed every sick person, and forgave the broken and battered.

Never before had humanity witnessed such a horizontal display of love made possible by the vertical union of the Godhead. And yet, even then, the general public was as fickle as can be. One moment they wanted to force Jesus to be their king (John 6:15) and the next they called for His crucifixion (Mark 15:13-14).

No wonder that Jesus never entrusted His heart to these folks because He knew what was in their hearts (John 2:24). He knew that their motives were tainted and subject to the prevailing opinion of the masses. So He never spent even one bit of energy trying to please them.

I think that it was in this same spirit that Paul wrote Galatians 1:10… For am I now seeking the favor of men, or of God? Or am I striving to please men? For if I were still pleasing men, I wouldn’t be a servant of Christ. (WEB) I find it interesting to read that Paul seems to say that it is simply NOT possible to please man and God at the same time!

I realize that Paul made this statement in reference to a bunch of legalists whose intent was to corrupt the good news of the gospel, but it is a verse that we still should take note of nonetheless. You see, in Paul’s day, there was a popular wind of doctrine that tried to bring the Gentiles into the same customs and rituals as their Jewish brothers. Instead of enjoying the unmerited favor of God’s scandalous grace through Christ and Christ alone, these ‘leaders’ tried to bully the Galatian newbies into more bondage.

Paul’s opposition to this divisive legalism cost him a great deal. It would have been far easier for Paul to not stand up for the truth of the gospel, but he refused to relent. Instead, he declared that he would choose to be a pleaser of God rather than be a pleaser of men… no matter what the cost.

Since God’s ways are far above our ways (Isaiah 55:9) and His chosen people are a bunch of poor, weak, fools (1 Corinthians 1:25-29), chances are we all will have to swim upstream from public opinion at one time or another. Whether that opposition originates within a religious system like the pharisees or a political world system like Pontius Pilate’s.

If we choose to live a life where our focus is on pleasing our Heavenly Papa, there is a good chance that we might offend somebody. It is not that we want to be offensive in any way, but that just might be the cost. Whether it be in defense of the downtrodden or the marginalized, or for the sake of our faithfulness to the Scriptures, you will probably not please everybody and that’s okay.

While I believe it is important to try and play nice with the other kids as much as we can (Romans 12:18), I believe that we all need to be freed from an unhealthy need to please people. Because if we don’t, we won’t truly be free.

If we live our lives this side of heaven trying to make everybody else happy, we may end up being the ultimate casualty. If we spend all our time trying to jump through the many hoops of expectations at the expense of being true to God and ourselves, what have we really accomplished in life?

This is a question that I have asked myself because this is a personal struggle that I have battled my entire life. Sure, people pleasing can help you become very popular, but it is not really a very satisfying way to live. When our own self-worth is rooted in the opinion of others, even our friendships can become toxic. Instead of loving each other for who we truly are, we can reduce our relationships to a place where we are performing for each other. The end result is that our authenticity is sacrificed at the altar of the fear of man.

If you look at a people pleaser from a distance, they might appear to be very noble because they are living their lives for others. But if you look closer, you can see that their own insecurities are the motivator for their affable personalities and their people pleasing is actually a form of manipulation and control to make themselves feel better.

It is only when we truly know that we are loved and accepted by God that we will be freed from the unhealthy need to be accepted by others. Of course that doesn’t mean we will become insensitive to the needs of other people because the opposite is true. The more that we are conformed into the image of the Son (Romans 8:29), the more we will be a manifestation of His servant heart. But just as Jesus didn’t entrust His heart to a fallen world system, neither should we.

My prayer today is that we would know without a shadow of a doubt that God is for us (Romans 8:31) and He loves ‘the real us’ more than we could ever dream possible. I pray that out of His love and acceptance, we would have the courage to resist the temptation to try and please people in a way that would not be pleasing to our Dad.

May our heart and our affections be so fixed on heavenly things (Colossians 3:1) that we would be oblivious to the disapproval of a broken world and religious system. May we all be pruned from controlling unhealthy relationships that are based on counterfeit affections that hold us hostage emotionally. I pray that we would all be truly free to be the genuine son or daughter that our Father created us to be.

May we be so synced with the heart of God that we would love what He loves and be a manifestation of His ways and His voice in every situation that we find ourselves in. ...Without caring whether His interests are shared by the majority of popular opinion or not.

Romans 12:1-2
1  Therefore I urge you, brothers, by the mercies of God, to present your bodies a living sacrifice, holy, acceptable to God, which is your spiritual service. 2  Don’t be conformed to this world, but be transformed by the renewing of your mind, so that you may prove what is the good, well-pleasing, and perfect will of God. (WEB)