DEVOTIONAL #12
A SON HAS BIG DREAMS 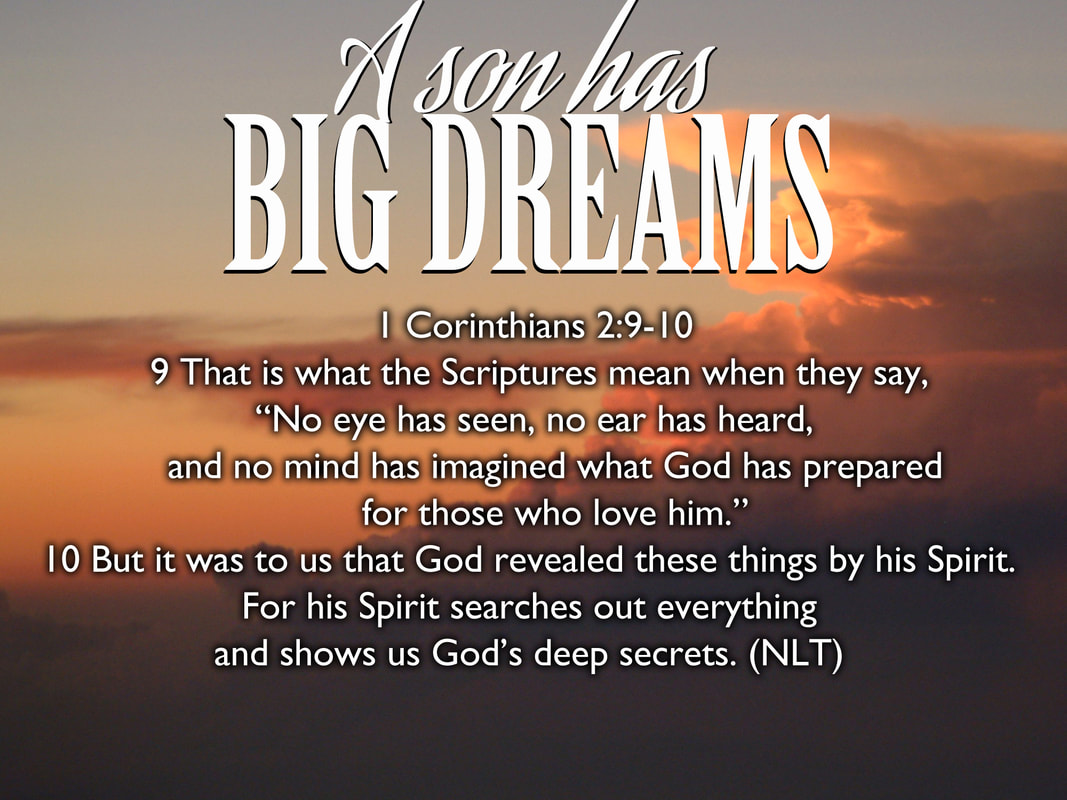 Jesus told His disciples that they would do even greater things than He did because He was going to His Father (John 14:12). He also told them that if they would speak to a mountain and not doubt, that it would be cast into the sea (Matthew 21:21). He also sent them out to cast out devils, heal the sick and even raise the dead (Matthew 10:1-8).

If that wasn't stretching enough, in Matthew 17:20, Jesus even told His disciples that nothing would be impossible to them if they only believed. It seems as if Jesus was saying that the sky was the limit as far as the their potential went once the Holy Spirit was sent to them.

For most of us when we read these Scriptures, our eyes may tend to glaze over as we form a blank stare similar to what a deer might look like staring into the headlights of an upcoming vehicle. After all, will we really do greater things than Jesus? Will really speak to mountains and see them thrown into the sea?

Is it really true that nothing will be impossible for those who believe? Since we know that Jesus said what He meant and meant what He said, this means that the answer is a resounding yes! And His words of encouragement were not only for His disciples but for everyone who would believe on Jesus through their testimony throughout the ages.

I will be the first one to say that I have not yet seen a physical mountain thrown into the sea and I have not yet seen someone raised from the dead (yet I have heard many encouraging stories of others who have). However, when I think about living in the realm of the impossible, I think what is at issue is our perspective of what is possible and what is impossible.

If I am thinking through the lens of my own natural ability and human strength, then I am going to be pretty limited with what I can do. However, if I really embrace the biblical principle that my strength is made perfect when I am at my weakest point (2 Corinthians 12:7-10), then that is a different story! Said in another way... If it is up to me, then I am done before I even start. But if it is all about God displaying His glory through my broken, clay pot (2 Corinthians 4:7), then the sky is truly the limit.

Think of it this way... If my dad was the richest dad in the world, my perception of my limitations would be less than if my dad was poor, right? If my dad could buy me anything, send me anywhere, do anything, then I would probably see the world 'as my oyster'. I probably wouldn't have many limitations in my ability to dream because I would be more focused on my dad's bigness rather than on my own resources.

I think it is the same thing that Jesus was talking about when He told us that nothing would be impossible to those who simply believed. In John 5:19-20, Jesus clearly said that the Son could do nothing by Himself but only could do what He saw His Father doing. In Jesus' own life, He knew that all that He had, came directly from His Father. He couldn't even speak a word without it coming from His Heavenly Dad.

But because He was living in constant union with the Creator of the universe, He lived an impossible life on a daily basis. Multiplying food, healing the sick, casting out devils, raising the dead were all part and parcel of the life of the Son of God because of the greatness of His Father who was living in Him doing the work. (John 14:10)

Someone who struggles with an orphan mindset has lost the ability to think beyond their own limitations. Since they do not feel a strong relational connection with the biggest, best Dad in the universe, they are left to their own devices and their own strength. Everything comes as a result of the sweat of their brow rather than as a free gift from the Father of Lights (James 1:17).

My prayer today is that we would all be able to dream big again. For many of us, previous failures and disappointments might colour our vision for the future. If there are any hurts that are preventing you from dreaming again, may the love of our Papa heal every memory or experience that might hinder you.Since the Kingdom belongs to little kids (Luke 18:15-17), may we all be happy to humble ourselves and become like little children again (Matthew 18:1-4). I believe that it is in the process of us learning to be small in our hearts that we will be restored to the beauty of childlike wonder and imagination that will enable us to dream impossible dreams.

May we all know that we are called to live a life beyond our own limitations because of the super ability of our Elder Brother, Jesus (John 10:10)! May faith and hope rise up in our hearts bound together in the cords of love (1 Corinthians 13:13) so that we can be free to dream bigger than we have ever dreamed before!

Ephesians 3:20-21
Now to him who is able to do immeasurably more than all we ask or imagine, according to his power that is at work within us, to him be glory in the church and in Christ Jesus throughout all generations, for ever and ever! Amen. (NIV)